Meryl Streep’s speech at the Golden Globes has reignited the perpetually-smoldering conversation about President-Elect Trump’s mockery of Serge Kovaleski, a Washington Post reporter with arthrogryposis, who had disagreed publicly with the then-candidate.

The most common refrain I hear on (my admittedly liberal) social media about the President-Elect’s shameful mimicry is some variation on:

It is a sentiment that speaks volumes about the privilege of the people expressing it.

For starters, the idea that these people are experiencing such a colossal failure of empathy that they believe mockery of people with disabilities is somehow an outre idea in American culture, really pisses me off. I have heard/seen this posted or brought up in conversation by people I admire, people I consider friends or family, and frankly people who have shaky ground under their feet if they are going to take Mr Trump to task for his behavior.

The fabulous Samantha Bee for instance, has criticized the President-Elect’s lack of decency to great effect on her program, but still used my own neurological condition as a punchline in the first segment of her first post-election show. In doing so, she joined a legion of comics and commentators who in times of need turn to TS for an easy punchline, when a joke wasn’t strong enough to hold up without punching down. 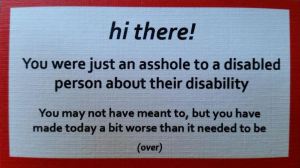 As a Touretter, I am certainly not a special snowflake singled out for ridicule by a callous society. Virtually every person I know with a disability experiences micro-aggressions, outright hostility, and/or mockery on some sort of regular basis. Outrage over Mr. Trump’s behavior makes it seem like this is some sort of outlier, rather than a part of daily life for many of us. My own anecdotal experience, along with that of many other people I know both in person and online, shows that far from a disqualifying offense, belittling someone for their disability status is perfectly normal to a significant portion of the American populace.

There is something patronizingly paternalistic about the “why wasn’t this the end of it” sentiment too.

President-Elect Trump’s mimicry of Mr. Kovaleski happened five months after the launch of Mr. Trump’s campaign. That campaign launch featured Mr. Trump describing Mexicans and “rapists” and “criminals.” The President-Elect rose to win the presidency with a campaign that incorporated blatant racism and misogyny. That this admittedly disgraceful incident from over a year ago continues to have such staying power, is itself a testament to the way an ableist society disempowers people with disabilities, seeing us not as people with our own agency, but as fragile embodiments of our respective conditions, needing the protection of those not so “burdened.”

If that sounds ridiculous to you, ask yourself these two questions:

Did you know about President-Elect Trump mocking a reporter with a disability? I am going to guess most of you said “yes.”

Did you know that that reporter’s name was Serge Kovaleski? For that matter, did you know that he wrote for the Washington Post, the name of his condition, or what its impact is on one’s life beyond what you gathered from Mr. Trump’s impression? Or alternatively, was the extent of your knowledge and outrage that there was some “disabled reporter” who the President-Elect mocked?

In contrast, Arianne Zucker’s name is frequently referenced when discussion turns to Mr. Trump’s infamous “pussy grabber” tape, during which he and Billy Bush objectified Ms. Zucker in a repugnant display of male entitlement (among other offenses).

President-Elect Trump and his GOP majority provide ample reason for outrage, and the threat that they pose to the disabled community goes far beyond making fun of us.

The promised repeal of the Affordable Care Act alone will lead to avoidable deaths, and the weight of those deaths are likely to fall disproportionately on people with disabilities. There is a real chance we could also see the weakening or elimination of vital provisions of the Americans With Disabilities Act, which would literally close doors and take away opportunities from a wide swath of people. And Mr. Trump’s proposed Secretary of Education promotes an educational model focused on charter schools and vouchers, which do not include the sort of legal access protections for equal treatment of disabled students found in public schools, short-cutting the ADA through public funding of private institutions.

People with disabilities are plenty familiar with being the subject of ridicule. We are also no strangers to having our rights and even our lives up for debate by a society that too often doesn’t make much effort to know or understand us. If that first sentence upsets you more than the second, take a long look in a mirror to see the face of our oppressors.